Learn how to make chicken wings on the Blackstone griddle, and toss your wings in three different sauces for a little variety!

I love making chicken wings at home, but one thing that I usually miss out on is the huge variety of sauce flavors that I can get from my favorite wing restaurant. So when my wife asked me to make chicken wings on the griddle recently, I decided to make my own wing buffet of sorts, with buffalo wings, Asian wings, and parmesan garlic wings.

And it was actually much easier than you think!

Just cook the wings on the griddle or flat top grill, and then toss them in the sauces… This works great if you’re feeding a bunch of people and they like different flavors, or if you want to make spicy buffalo wings for yourself but your kids want the sweet and sticky Asian style chicken wings.

Here’s how to make them:

Ingredients for Chicken Wings on the Griddle

Because I was making a giant batch of “naked” wings and then separating them out into three different flavor groups, I didn’t use any type of dry rub on the wings first. I also find dry seasonings and rubs to be unnecessary for wings, because they get sauced at the end anyway.

Here are the ingredients that I used for my Blackstone griddle wings:

For the Buffalo Wings:

Buffalo wings are the easiest to make, because I just use my favorite store-bought wing sauce. You can definitely add other ingredients to the buffalo sauce or even make your own homemade buffalo sauce, but I just like it right out of the bottle. My two favorite grocery store wing sauces are:

For the Asian Wings:

I made my own homemade Asian wing sauce, because I already had all of the ingredients on hand from making this Egg Roll in a Bowl Blackstone griddle recipe. You could also use a store-bought teriyaki sauce, but my sweet and sticky wing sauce is easy to make with:

For the Parmesan Garlic Wings:

NOTE – If you’re going to be making all three wing varieties at the same time like I did, then you’ll also want three large mixing bowls. I find it easiest to make all of the sauces in their own bowls, then I just divide the cooked chicken wings between the three different sauce bowls and toss them.

How to Make Chicken Wings on the Blackstone Griddle

Step 1: Prep your chicken wings and preheat the griddle.

First preheat your griddle on low so that it can come up to temp while you prep the wings. I always preheat my griddles (whether the Blackstone, the Camp Chef, or the Pit Boss) on low to prevent warping… And I find it much easier to control the temps and to keep the griddle from getting too hot. You can always adjust the knobs up a bit if needed once you start cooking.

Most wings come whole right out of the package – the drumstick, flat, and wing tip all in one piece. So I prefer to cut them into pieces before cooking them, and I discard the wing tips.

What about the excess moisture?

I’ve made chicken wings on the griddle a few different ways – You can watch this YouTube video to see how I salted the wings and put them in the fridge for a few hours and then dabbed them with paper towels.

But for my most recent video, I wanted to try something different, so I skipped the salt and paper towels… After making them both ways, I don’t find it necessary to pat the wings dry with a paper towel, because I find that a lot of the excess moisture comes off as I’m cutting and prepping the wings… However, if you feel like your wings are too wet, you can go ahead and dab them with paper towels to remove some of that excess moisture and to help them crisp up on the griddle.

Step 2: Start cooking the chicken wings on the Blackstone griddle.

After the wings have been cut, it’s time to put them on the pre-heated griddle.

One of my biggest tips for cooking chicken wings on the griddle is to first add them to the hot surface skin side down. This helps to render out the fat and make it crispy.

You should also make sure that you allow enough space in between each wing, instead of crowding them on the griddle. And once you get your wings on the flat top grill, DON’T TOUCH THEM for probably at least a full 6-7 minutes (depending on the temperature of your griddle and the outside temp). This helps them to get crispy as well.

*Side Note – This was 10 pounds of chicken wings, and they fit really well on my 4 burner Blackstone Air Fryer Combo.

Since the chicken wings have to cook so long before you flip them you can take that time to make your different wing sauces.

If you’re making all 3 flavors of wings, then you’ll need three large mixing bowls. Then, you can add the ingredients for each different sauce in a separate bowl, and when your wings are cooked and ready to toss in the sauce, you’re ready to go.

For the Asian wings, I used a thin metal bowl, because I added the bowl with the Asian wing sauce ingredients to the corner of the Blackstone to heat it and to dissolve the sugars. I also used a mixture of cornstarch and water to thicken the Asian sauce, and I added that slurry to the bowl of warm sauce on the griddle.

You can print out the full griddle chicken wings recipe down below for how to make each of the 3 sauces!

Step 4: Flip the wings and cook until done.

After your wings have cooked untouched on the first side for about 7-10 minutes (depending on the temperature of your griddle), it’s time to flip each individual wing to the second side to continue cooking.

I recommend using a good pair of metal tongs for this especially if you’ve got a griddle top full like I did, because it’s easier to get in between each wing to flip.

When you turn the wings, they should look something like this with a nice golden skin… That’s the fat rendering out and the skin getting a bit crispy, which is what you want:

Then, just continue to cook the wings until they’re done.

How do you know when the wings are done on the griddle?

You really need to use an instant read probe thermometer to check the internal temp of each wing. Because there’s such a large heat variance between different areas of the griddle surface (no matter if you have the Blackstone griddle or a different flat top grill), the chicken wings will cook at different times and temps. So the only real way to insure that each wing is cooked through is to probe them.

You can check out my favorite instant read probe thermometer and ALL of my favorite kitchen and griddle tools here!

As I’m checking the temps of each wing, I move them to different areas on the griddle also. When a wing is the correct internal temperature, I move it to the side of the Blackstone griddle which is a cooler area – but the wings will continue to cook a bit, even in that cooler zone, which is fine… Remember, the wings are full of fat, so they can be cooked over 165 degrees and be fine. In fact, you may want them to cook until as high as 175-180 degrees.

For the wings that don’t probe above 165 degrees, you can leave them in the center of the griddle, which is the hotter zone, until they’re done cooking.

Keep in mind that your wing flats will cook faster than your drumsticks, because they’re smaller and thinner.

When your chicken wings are cooked through, it’s time to sauce them. I had about 10 pounds of wings total, and I divided them up between three different bowls. Let’s talk about how I sauced each of the different kinds of wings:

Since I just used a bottled buffalo sauce, I just added about 1 cup of the sauce straight to the bowl, and then tossed in about 3 pounds of cooked wings like this:

Because the parmesan, garlic, and mayonnaise combination wasn’t really a “sauce”, I had to heat it on the griddle with the wings to loosen it up a bit. I just added the thick mayonnaise-like sauce to the warm Blackstone griddle and put the cooked chicken wings right on top of it. As the cheese melted and the mayonnaise warmed up, the mixture coated the wings creating an awesome flavorful wing sauce.

Just toss the wings and the parmesan garlic together on the griddle until everything is mixed through and then transfer to the garlic parm mixing bowl like this:

See the bits of garlic? It gets nice and toasted and fragrant on the griddle… Delicious!

The ingredients for the Asian wing sauce are thinner and more runny when just mixed together in a bowl, so before you add the sauce to the wings, you’ll need to thicken it up a bit.

While I was cooking the wings, I set the metal bowl directly on the griddle surface to heat the ingredients and dissolve the sugars. I also added a slurry ( a mixture of cornstarch and water) to the warm ingredients to help thicken the sauce. When your sauce is in the bowl heating up on the griddle, you can also adjust the sweetness and heat by adding more brown sugar, more Siracha, etc.

Here’s what the Asian wings looked like after tossing them in my finished sauce:

After I sauced the Asian wings, I also put them back on the griddle to cook even more. This helped to thicken up the sauce as well… I was really going for a sweet and sticky wing, and I got it!

I hope you enjoy these chicken wings on the griddle! What is your favorite flavor of chicken wing? Leave me a comment down below… And feel free to print the recipe card to add to your list of griddle appetizers!

Want some other griddle appetizers? Check out these posts: 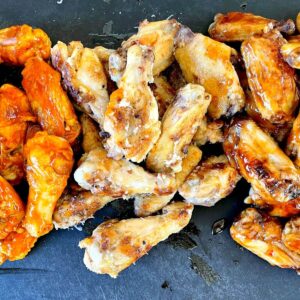 Chicken Wings on the Griddle

For the Buffalo Wings:

For the Parmesan Garlic Wings:

For the Asian Wings: