Looking for fantastic Blackstone griddle recipes that you can serve for appetizers OR dinner? These loaded smashed potato skins are piled high with leftover pulled pork, shredded cheese, bacon, and barbecue sauce… but the real star of the show is the potato skin base that’s smashed on the griddle for a perfectly crisp bite!

Truth be told, these Blackstone griddle appetizers were my wife’s idea…

She’s been asking me to make smashed potato skins on the griddle for a while now, but I’ve been hesitant because the smashed baby potatoes that I’ve tried in the past didn’t turn out perfectly… and I despise putting a recipe or video out into the universe if it can’t be easily replicated by you guys.

But when she explained the concept to me – that it would actually be a hollowed out potato skin that’s flipped upside down on the griddle and then smashed down with a burger press to a flat and crispy potato – I figured I’d give it a try. And, we had just finished an epic showdown of pulled pork butts on the Weber kettle charcoal grill vs. the Pit Boss pellet smoker, so we had a bunch of leftover barbecue pork in the fridge.

Another confession… These barbecue potato skins are actually inspired by a local restaurant that serves regular potato skins topped with pulled pork. But this smashed and loaded version of that appetizer is way better.

If you’re looking for a creative recipe for the flat top grill, then you’ve got to try these pulled pork barbecue smashed potato skins!

To make this easy Blackstone griddle recipe at home, you’ll need the basic ingredients for potato skins, plus some leftover barbecue meat. Here’s the full list of ingredients:

How to Make Smashed Potato Skins on the Griddle

If you’ve got a griddle, then chances are you also have a burger press… and I’d venture to guess that you’ve smashed a burger or two. Think of these potato skins as a smash burger… only they take a bit longer to get that nice crispy crust.

Here’s how to make the BEST smashed potato skins on your griddle. What you top them with is up to you!

Step 1: Bake and hollow out potatoes.

Before you can start making these potato skins, you’ll need the actual hollowed out, cooked potatoes.

Just bake a few potatoes in the oven until they’re tender and cooked through (just like you would for a regular baked potato). Then, allow the potatoes to cool down a bit before moving on. You can also bake the potatoes the day before and keep them in the refrigerator whole overnight to save yourself some time.

Step 2: Prep the other ingredients for your smashed potatoes.

When your potatoes are done, go ahead and prep the other ingredients so that they’re all ready to go on the skins.

If you’re familiar with griddle cooking, then you know that one of the biggest challenges of cooking on a flat top grill is the speed with which most foods cook. The pace of the cook can be quite fast, so it’s best to have all of your ingredients fully prepped before you start adding things to the heated griddle.

Go ahead and grate your cheeses, chop the cooked bacon, and slice the green onions. You should also make sure that your barbecue seasoning and sauce is on stand-by for when you’re ready for it.

And lastly, heat up your leftover pulled pork on the griddle. You don’t want to overcook the meat, because it will dry out… remember, it’s probably already been slow-cooked for a good 12 hours. Once the pork is heated through, you can go ahead and transfer it to a bowl so it’s ready to go.

CHEF’s TIP – If you don’t have leftover pulled pork, you can also use smoked brisket or even rotisserie chicken mixed with a bit of barbecue sauce. You may also be able to find pulled pork in the refrigerated section of your grocery store. Or, you can also leave off the barbecued meat altogether and just make a traditional potato skin. If you go with a store-bought version, then just try to find one that’s not too heavily sauced.

Step 3: Smash the potato skins on the griddle.

When all of the other ingredients are prepped, it’s time to smash the hollowed out potato skins on the griddle.

To help the potato skins crisp up and fry a bit, I added some beef tallow to my Blackstone griddle surface first. Then, press down on the skins evenly with the press, hold down for about 10 seconds to create a good crust, and allow that first side to get nice and crispy before flipping to the second side.

Your smashed potatoes on the Blackstone should look something like this before you flip them over to the second side:

For reference, it took my potato skins about 5 minutes to cook on the first side, and my Blackstone griddle was on the low heat setting. When your skins are nice and golden brown on the first side, then it’s time to flip them. You can also add a bit more oil or beef tallow to the griddle before flipping the smashed potatoes the the next side to finish cooking:

See that nice and golden brown, crispy deliciousness? That’s what you want!

Step 4: Top with cheese, pork, and other ingredients.

When the smashed potatoes are nice and crispy, it’s time to start piling on the other ingredients. Start by lightly sprinkling each smashed potato skin with your favorite barbecue or all-purpose seasoning. Then, top each smashed potato with a thin layer of shredded cheese… You don’t want to add too much cheese at this point, because you’ll add another layer to the top.

Here’s what your smashed barbecue potato skins should look like cooking on the Blackstone griddle at this point:

Then, it’s just about letting the cheeses melt. You may need to add a bit of water to your griddle surface to create some steam, and then dome about 4 of the potato skins at a time to help the cheese melting process.

When the cheese is fully melted, your awesome griddle appetizers are done! Transfer them to a cutting board or serving platter, and top the potato skins with your favorite toppings. We topped our skins with a dollop of sour cream and sliced green onions. Hot sauce, a drizzle of barbecue sauce, or diced jalapeños would also be a good addition.

Then break out your knife and fork… These griddle appetizers are delicious, but they’re definitely not a neat and tidy app. Have some napkins near by, and serve these loaded potato skins on a plate. Or do like we did, and just have two or three of these smashed potatoes for your dinner!

Here’s what the finished griddle potato skins look like:

And YES, they were definitely as good as they look in the photos! Better actually!

Want some other griddle appetizer ideas for your flat top grill? Check out these posts:

Want to print out this easy griddle recipe? Just use the recipe card down below… and don’t forget to SAVE this post to your Blackstone Griddle Recipes PINTEREST board: 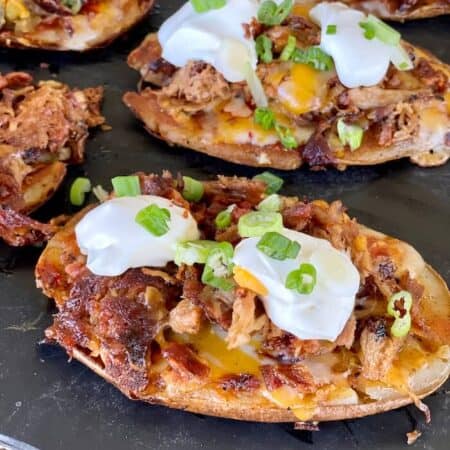