Looking for fantastic Blackstone griddle breakfast recipes that are easy to make and big on flavor? These loaded breakfast potato skins are piled high with scrambled eggs, shredded cheese, peppers and onions, and crumbled breakfast sausage… but the real star of the show is the potato skin base that’s smashed on the griddle for a perfectly crisp bite!

I’ve been dreaming about these barbecue smashed potato skins ever since we made them with some leftover pulled pork that we had in the fridge. So when we ended up with a few leftover baked potatoes from an awesome steak dinner that we had the night before, I knew that we had to make loaded breakfast potato skins!

If you’re looking for creative ways to make potatoes on the griddle for breakfast, just trust me… Skip the hash brown omelette and try these instead! Potato skins for breakfast, what’s not to love?!

Here’s how to make breakfast potato skins on the griddle, sure to be your new favorite breakfast recipe:

To make this easy breakfast griddle recipe at home, you’ll need the basic ingredients for potato skins, plus some scrambled eggs and breakfast meat. Here’s the full list of ingredients that I used for my egg and cheese potato skins:

Here’s how to make the BEST breakfast potato skins on your griddle or in a large skillet on the stovetop. What you top them with is up to you!

Step 1: Bake and hollow out potatoes.

Before you can start making these potato skins, you’ll need the actual hollowed out, cooked potatoes.

Just bake a few potatoes in the oven until they’re tender and cooked through (just like you would for a regular baked potato). Then, allow the potatoes to cool down a bit before moving on. You can also bake the potatoes the day before and keep them in the refrigerator whole overnight to save yourself some time.

Before you start building your potato skins for breakfast, you’ll need to cook the ingredients that go inside them. Start by cooking the breakfast sausage or other breakfast meat on the griddle. Then, while the meat is cooking you can start sautéing the peppers and onions.

I like to move some of the residual sausage grease on the griddle into my vegetables for extra flavor.

If you want other fillings to go inside your breakfast potatoes, like sautéed mushrooms or poblano peppers, now is the time to cook those as well.

Step 3: Smash the potato skins on the griddle.

When the breakfast meat and vegetables are cooked through, it’s time to smash the hollowed out potato skins on the griddle.

To help the potato skins crisp up and fry a bit, I added some beef tallow to my Pit Boss griddle surface first, but you can also use your favorite cooking oil. Then, press down on the skins evenly with the press, hold down for about 10 seconds to create a good crust, and allow that first side to get nice and crispy before flipping to the second side.

Depending on the temperature of your griddle, it could take up to 8 or 10 minutes to get the potato skins crispy on the first side. Then add a bit more tallow or cooking oil to a fresh spot on the griddle, and flip the smashed potatoes to the second side to continue to cook.

Your smashed potato skins should look something like this after you flip them over to the second side:

See that nice and golden brown, crispy deliciousness? That’s what you want!

Cooking the scrambled eggs is the last step before actually assembling your breakfast potato skins. In fact, 9 times out of 10 I recommend that griddle beginners cook their eggs last. That’s because eggs cook super quickly, and you don’t want them sitting out and getting cold while other components of your dish are being prepared.

For tips on making the best griddle eggs, check out this post: How to Make Perfect Griddle Scrambled Eggs Every Time

When you’re making the eggs for your breakfast potato skins, be sure not to overcook them because they will continue to cook a bit on top of your potato skins as the cheese is melting.

When the scrambled eggs are done, it’s time to start assembling your breakfast potato skins. Start by topping each smashed potato with a thin layer of shredded cheese (about 2 tablespoons on each)… You don’t want to add too much cheese at this point, because you’ll add another layer to the top. The little bit of cheese on the bottom helps to hold the scrambled eggs in place.

Next, add the scrambled eggs and diced vegetables mixture (about 1 egg per potato skin), and top with the crumbled cooked sausage.

Here’s what your smashed breakfast potato skins should look like cooking on the griddle at this point:

Then, just add the remaining cheese to the top of the sausage, and you’re in the home run stretch.

Lastly, it’s just about letting the cheeses melt. You may need to add a bit of water to your griddle surface around the potatoes to create some steam, and then dome the potato skins to help the cheese melting process.

When the cheese is fully melted, your awesome griddle breakfast potatoes are done! Transfer them to a cutting board or serving platter, and top the potato skins with your favorite toppings. We topped our skins with some diced jalapeños, diced tomatoes, hot sauce, and a sprinkling of chopped cilantro.

And here’s the finished product:

And, YES, they do taste as amazing as they look!

If you’re looking for creative breakfast griddle recipes that include potatoes and breakfast meat, then you’ve got to try these breakfast potatoes! WAY better than a hash brown omelette, in my opinion, and easier to make, too.

You’ll definitely want to add these breakfast smashed potato skins to your list of griddle recipes! You can use the recipe card down below to print out the recipe and save it for later, like when you’re craving a hearty and dang flavorful breakfast potato: 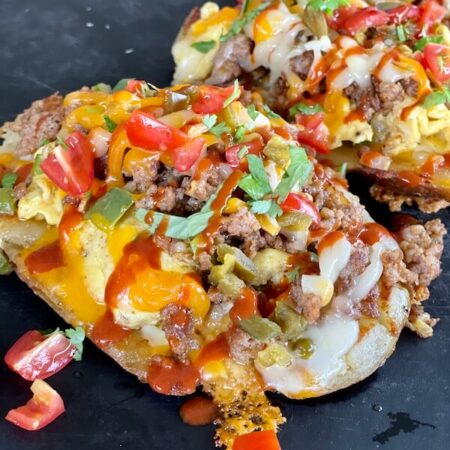 
Course Breakfast
Cuisine American
Prep Time 5 minutes
Cook Time 20 minutes
Total Time 25 minutes
4 people
These breakfast potato skins are loaded with scrambled eggs, sausage, sauteed peppers and onions, and cheddar cheese. But the real star of the show is the smashed potatoes that get perfectly crispy on your griddle or in a skillet!
Print
Pin
Share
Rate