I love a good “taco night” themed party. Any excuse to make homemade margaritas, am I right?

So when we made a giant batch of these easy Blackstone chicken fajitas for a party that we were hosting recently, I knew that I had to come up with some fantastic Mexican themed appetizers to serve also.

It had been a while since I brought out the Pit Boss Navigator Pellet Smoker, and I had been craving some smoked jalapeño poppers, so these delicious Mexican poppers appetizers were born. And they were a HIT with all of my guests!

Not to mention, smoked jalapeño poppers are one of the easiest appetizers to make, because you can prep them the day before your party or tailgate, refrigerate them overnight, and then cook them on the smoker a few hours before your guests are set to arrive.

Here’s how to make bacon wrapped smoked jalapeño poppers with a Mexican twist:

Here are the ingredients you’ll need to make these awesome smoked Mexican appetizers:

The Jalapeños and Bacon:

Look for fresh jalapeños that have a nice bright green color and no brown or black spots on the skin. Try to find peppers that are equally sized also, so that they cook evenly on your smoker or grill.

I chose to use larger jalapeños because I was planning on cooking them at a higher temperature, and I didn’t have but an hour or so of cook time. You can also use medium-sized peppers and cook them at a lower temperature (225-250 degrees F) for a longer period of time if you prefer.

For this recipe, I used 16 jalapeño peppers, so I ended up with 32 individual poppers.

You will also need one strip of bacon for each popper. Use the regular bacon, because a thick cut will take longer to cook on the grill.

The filling for the smoked jalapeño poppers appetizers is made with:

I also drizzled my smoked poppers with a simple chipotle cream sauce made with:

I also sprinkled some chopped fresh cilantro on top of the smoked bacon wrapped poppers for a bit of color before serving.

These smoked bacon wrapped jalapeño poppers are the perfect appetizers for big parties or for tailgating, because they can actually be prepped the day before and stored in the refrigerator. Then, about an hour and a half before you’re ready to serve the poppers, just turn on your smoker and cook them.

This really is such an easy recipe, and when I served them at a 40th birthday party that we hosted recently, everybody LOVED them.

Here’s how to make my Mexican version of smoked jalapeño poppers:

First off, put on a pair of latex gloves. The oils from the fresh jalapeños have a tendency to stay on your hands for a while afterwards, so if you were to rub your eyes, well… let’s just say “No bueno!“.

Then, start by cutting the jalapeños in half lengthwise and deseeding them. I found it easiest to use a spoon to scoop out the seeds and inner membranes.

I chose to leave the stems on the peppers because I like the look. When you’re eating the poppers, you can just eat down to the end and then discard the stem. But if you prefer, go ahead and remove the stems when you’re cutting the peppers in half.

Once your jalapeños are halved and deseeded, make your cream cheese and sausage filling.

Just dump the softened cream cheese, shredded cheese, cooked crumbled sausages, and Mexican seasoning in a large bowl and mix together. You can also use a hand mixer like I did to make sure that the cream cheese filling is thoroughly combined… it’s much easier than using a spoon to mix it by hand.

Your cream cheese mixture should look something like this:

Step 3: Fill the jalapeños with the Mexican cream cheese filling.

Next, fill the halved peppers with the cream cheese mixture. I used about 2 1/2 to 3 tablespoons of filling in each pepper half, but you may use more or less depending on the size of your jalapenos.

When stuffing your peppers, you want the mixture to extend past the top edge of your pepper slightly. If you dome the filling on top of the peppers, then it’s more likely to ooze out all over your smoker or grill, and then all of that flavor is wasted.

Your stuffed jalapeño peppers should look something like this:

Next, just wrap one strip of regular bacon around each stuffed pepper. As you’re wrapping the bacon, make sure that it overlaps slightly so that the cheese filling doesn’t ooze out as the poppers are cooking. When you get to the end, just insert a toothpick through the tail end of the bacon so that it doesn’t come loose during cooking.

Lastly, sprinkle the tops of the bacon wrapped stuffed jalapeño peppers with some of your Mexican or taco seasoning. They should look like this:

MAKE AHEAD TIP – At this point, you can wrap the entire sheet tray with plastic wrap and put it in the refrigerator overnight, which is what I did when I made these. Then, your poppers are ready to go on the smoker the next day. This is a great way to get some prep work done early if you’re going to be making a bunch of other dishes for your party or tailgate.

Step 5: Cook the bacon wrapped jalapeño poppers on the smoker or grill.

After your poppers are stuffed and wrapped, it’s time to put them on the grill or smoker. What temperature is completely up to you… Typically, you would smoke around 250 degrees F, but I chose to set my Pit Boss Navigator Pellet Smoker to 400 degrees F because I didn’t want to spend hours cooking the peppers.

*Note – If you don’t have a pellet smoker like a Pit Boss or a Traeger, then you can follow this easy guide to use your kettle charcoal grill as a smoker.

At 400 degrees, the stuffed bacon wrapped poppers took about 50 minutes, and then I cranked up the heat to 450 degrees F for the last 15-20 minutes so that the bacon could get a bit more crispy.

Before I put the poppers on the smoker grill, I lined two large baking sheets with aluminum foil and put wire cooling racks on top. Then, I placed the bacon wrapped poppers on the racks, spaced out a bit so that they could cook evenly like this:

This is just a personal preference, because the foil lined baking sheet catches the bacon drippings and any cheese that may ooze out, so it keeps my smoker cleaner.

And when the bacon is cooked and crispy and the peppers are tender, your smoked poppers are done! Here’s what mine looked like when they were done cooking:

Carefully remove the baking sheets from the smoker, and allow the poppers to cool on the racks for about 10-15 minutes before serving.

While the poppers are cooking on the smoker or grill, whip up a quick sauce to serve with them. Blend together sour cream, canned chipotles in adobo, and a little lime juice.

The sour cream in this easy chipotle crema helps to balance out the spiciness of the peppers, and the smoked adobo peppers perfectly compliment the smokiness of the Mexican poppers.

You can drizzle the sauce on top of the peppers like I did, and serve the rest in a small bowl for dipping. Top the peppers with some chopped fresh cilantro and you’re easy Mexican appetizers are done:

Other Ways to Stuff Your Smoked Jalapeño Poppers

Since I was doing a Mexican themed fiesta for the big birthday party that we were hosting, I chose to stuff my jalapeños with more Mexican ingredients like chorizo and taco seasoning. But there are a ton of other options for making the cream cheese filling for your smoked poppers!

Here are some other ideas:

What to Serve with Mexican Style Smoked Bacon Wrapped Poppers

These Mexican jalapeno poppers were a fantastic addition to our Mexican buffet and taco bar! We served the poppers with these other dishes:

You could also add these appetizers to a buffet with other finger foods for game day!

I doubt that you’ll have any of these delicious Mexican style smoked poppers left, but just in case, you can store them in the refrigerator in a food storage container or a zip top bag for up to 4 days.

Then, when you’re ready to serve the leftovers, just reheat them in a toaster oven or conventional oven at 350 degrees F until heated through.

Want to add this easy smoker appetizer recipe to your recipe binder when you need a creative, fan favorite finger food? Just use the recipe card down below: 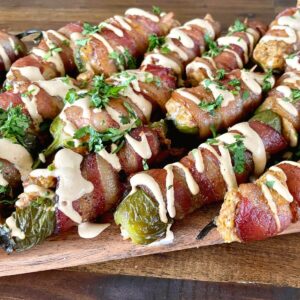 
Course Appetizers
Cuisine Mexican
32 poppers
These smoked bacon wrapped jalapeño poppers have a delicious cream cheese filling made with chorizo, ground breakfast sausage, shredded cheddar cheese, and taco seasoning. Wrap the stuffed jalapeños in bacon and smoke them on your grill or smoker for easy smoker appetizers, perfect for your next fiesta!
Print
Pin
Share
Rate

For the Chipotle Cream Sauce:

Want to make this recipe later? Save this PIN to your smoker appetizers Pinterest Board: