This Mexican Street Corn on the griddle is a rich, delicious, and easy side dish to make on your flat top grill. Made with frozen corn so you can whip up this Mexican favorite anytime of year!

The wife and I visited a new local Mexican restaurant recently, and we were absolutely blown away by their Mexican street corn side dish. This luscious, decadent, almost sinful corn side dish resembled an Alfredo, which makes sense because it’s made with cotija cheese. If you’re not familiar with aged cotija cheese, it is pretty salty and crumbly, similar to a parmesan.

And we liked this Mexican corn dish so much that we had to go back to the restaurant again just to get another taste of the corn… and to do a little recon so we could attempt to recreate it on the griddle.

What is Corn Esquites?

On the restaurant’s menu, this side is called “Corn Esquites”, which means “corn in a cup”. Makes sense, since this Mexican street corn was served in a cup, similar to a soup cup.

Don’t confuse corn esquites (off the cob) with elotes, pretty much the same version of this dish but with the corn served on the cob.

Let me start off by saying that this version of Mexican street corn is probably not authentic… I haven’t had corn esquites in Mexico, but this is what we used to make our street corn on the griddle:

How to Make Mexican Street Corn on the Griddle

Once your ingredients are chopped, this Mexican street corn on the griddle comes together pretty quickly. Here’s how to make it:

Step 1: Prep your corn for the griddle.

If you’re familiar with griddle cooking, then you know that you shouldn’t add a frozen food product directly to your hot griddle surface. The drastic temperature differences can cause your griddle top to warp. So instead, I let my bag of frozen corn thaw out in the refrigerator overnight.

If you’re using fresh corn on the cob, then go ahead and cut it off the cob for this corn dish.

Step 2: Cook corn, onions, and peppers on the griddle.

Preheat your griddle on low heat. Then, add a little avocado oil (or your favorite cooking oil) to the griddle and start cooking the onion, bell pepper, jalapeno, and corn.

Chef’s Note – For a nice char and extra flavor, spread your corn and veggies out in a thin layer across your griddle surface and let it start to cook without moving it around. Similar to cooking a smash burger or a steak on the griddle, if you don’t mess with it much to start, the corn will start to develop a nice crust or char and the sugars will begin to caramelize. Here’s what mine looked like at this stage:

I used a box grater to grate the cheese. This type of cheese is naturally very crumbly, so grating it is very easy… You only need to apply very light pressure while you’re running it down the grater to get a nice thick crumble.

We started by adding only about 5 ounces of cotija cheese to our street corn on the griddle, but as we started adding more ingredients to try and replicate the corn esquites that we had at the restaurant, we ended up adding the rest of the package of cheese. For reference, the cotija cheese that we used came in a 10 oz. package.

Step 4: Add other Mexican street corn ingredients to the corn and veggies.

At this stage, you’ll probably need to adjust the temperature of your griddle before adding the crema. I actually turned two of my griddle knobs off completely and left the other knob on the low setting. You don’t want the cream to curdle because your griddle is too hot.

Add the crema, mayonnaise, and grated cotija cheese to the corn and veggie mix and mix it all together. Then, sprinkle on the desired amount of chipotle chili powder and cilantro. Mix it all together to combine and allow the Mexican street corn to continue to cook for about 3-4 minutes.

At this point, you can taste your corn esquites and add other ingredients if you wish. If you want more cilantro add more cilantro… if you want a spicier flavor, add more chili powder. It’s really up to you how you finish this flat top grill side dish. We actually ended up adding about a 1/3 to 1/2 cup of milk to ours, because we wanted a thinner consistency, and I was afraid that adding more mayonnaise or crema would just make it thicker.

Feel free to experiment with the ingredients to get the flavor and consistency that you like for your Mexican street corn.

This Mexican street corn on the griddle is best served warm, so remove it from the griddle and transfer to a serving bowl or individual ramekins. Garnish with your favorite toppings and serve this delicious Mexican side dish immediately.

Our version of the street corn may not be exactly like what we had at the restaurant, because we added bell pepper and onion, but the overall flavors are very similar… and it’s delicious!

And if you’re looking for something to serve with your griddle Mexican street corn, then try these amazing Chicken Tacos on the Flat Top Grill… they’re honestly some of the best chicken tacos that I’ve ever eaten! And feel free to print this Mexican Street Corn recipe below and add it to your list of easy flat top grill side dishes: 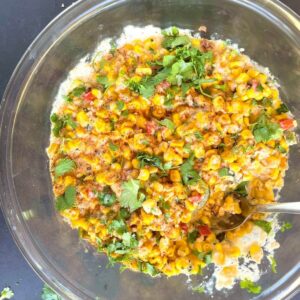 Mexican Street Corn on the Griddle


Prep Time 5 minutes
Cook Time 15 minutes
Total Time 20 minutes
This Mexican street corn on the griddle is a rich and decadent side dish to make on your flat top grill. Made with frozen corn so it's perfect for anytime of year!
Print
Pin
Share
Rate

*Don't add frozen corn directly to the hot griddle surface. This could cause the griddle top to warp. Instead, thaw the corn in the refrigerator overnight.