If you love french toast, then you’ve got to try this Nutella French Toast! Cook it in your cast iron skillet for the perfect, slightly crispy outer crust. Top with a dusting of powdered sugar and a few sliced strawberries for an indulgent gourmet breakfast prepared right in your own kitchen!

Nutella is a staple in our house.

Our daughter uses it to make sandwiches, we mix it in homemade frosting, and a mystery family member keeps sneaking a taste and leaving the dirty spoon in the sink.

Yup, Nutella is like chocolate gold. You can put it on all sorts of foods to add instant decadence… So why not take a classic sweet breakfast and make it even better?

This Nutella French Toast is super easy to make, and it will impress the socks (and maybe even a few other undergarments!) off your wife. If you can make a sandwich, beat an egg, and even remotely use your cast iron skillet, then you can make this breakfast. Here’s how:

How to Make Nutella French Toast

Did you know that the mixture that you dip your bread into for french toast is called french toast custard? You learn something new everyday! Here’s how to make it:

In a pie pan or shallow, wide bowl, beat 3 eggs, 1 cup half and half, 2 tbsp brown sugar, and 1 tablespoon vanilla extract until well combined. And that’s it!

Spread approximately 2 tablespoons of Nutella on one slice of your dried out bread.  If you’re a HUGE Nutella fan, you can add a bit more, but remember Nutella is pretty rich so a little goes a long way. Top that with another slice of bread to form a sandwich.

Step 3: Dip your Nutella Sandwiches in the French Toast Custard

Dip both sides of the sandwich into the custard mixture for approximately 20-30 seconds per side.  You want the bread to absorb the mixture, but not get too soggy.

*Side Note – The drier or staler your bread is, the more custard it will absorb, which means more flavor. That’s why it’s best to use stale bread.

Preheat your skillet on medium low and pour yourself a cup of coffee because the perfect french toast takes a bit of patience. Once your skillet is preheated, add butter AND oil. Just a bit of oil goes a long way, so be sure not to add too much… A good rule of thumb when making french toast in a cast iron skillet is 1/2 tablespoon of butter and 1/2 tablespoon of oil per sandwich.

Here are some more questions you may have about the actual cooking process for the BEST french toast:

Why do you need to add butter AND oil to the pan?

The oil has a higher smoke point, so when combined with the butter, it helps prevent the butter from burning. The combination of butter AND oil helps your French Toast with Nutella to “fry” and develop those nice, crunchy edges.

What kind of oil should I use to make french toast?

The type of oil that you use is up to you. Vegetable oil, canola oil, avocado oil, and olive oil are all perfectly fine to use when cooking Nutella french toast.

I don’t have butter… Can I use margarine to make french toast?

NO! Margarine may be cheaper than butter, but you get what you pay for. Margarine has a higher water content than butter, and thus will not allow the bread to “fry”. If you try to make french toast with margarine, it will turn out soggy. And nobody likes soggy french toast!

I’m in a rush… Can I cook french toast on high heat?

If you’re in a rush, just make cereal.

Step 5: Serve your Nutella French Toast with toppings of your choice

After your french toast is perfectly cooked, remove it from your skillet, plate it, and top with your favorite french toast toppings.

Since the Nutella is pretty rich, I like to top my Nutella french toast with just a tad bit of maple syrup and a slight dusting of powdered sugar to prevent sugar overload. You can also add fresh berries and tell yourself that you’re eating a healthy breakfast because it contains fruit… at least that’s my wife’s rationale.

Why is my french toast soggy?

If your french toast is soggy, it’s probably because of one of these reasons:

What kind of bread should I use for french toast?

To make the BEST french toast, you need to have the right bread. Don’t use breads that are too thinly sliced… so that pretty much eliminates all pre-cut sandwich loaf style breads.

Challah, brioche, and thick cut Texas toast are all good options. For added sweetness, you can also use a thick-sliced cinnamon swirl bread. And remember, for this Nutella stuffed french toast recipe, you are stacking two slices of bread on top of each other, so you don’t want your bread to be TOO thick.

Just remember that the thickness of your bread, and how much custard it soaks up, will cause your cooking times to vary.

What if I don’t have stale bread? Can I use fresh bread?

NO! If you don’t have stale bread, you can lay your sliced bread out on the counter over night to dry it out. Or, if you forget to leave your bread out the night before making french toast, then you can put your bread in the oven for 1 hour at 150 degrees to help dry it out.

If you make french toast with fresh bread, it will likely turn out soggy.

Why should I cook french toast in a cast iron skillet?

A cast iron skillet retains heat very well, which is important when you need to cook at a low heat setting. With french toast you want crispy edges, rather than soggy toast, so you want to cook it on lower heat to allow it to cook long enough without burning. With this type of cooking method, a cast iron skillet works best.

What are some other ways to make stuffed french toast? 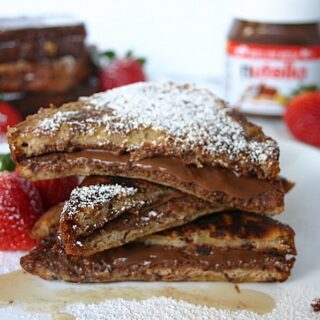 *If you cook it too fast, the Nutella doesn’t have time to absorb the heat and melt. Also, it’s best to fry the french toast on medium low because it allows the bread to properly fry without burning, so you don’t get soggy french toast.