Want to cook your kids an awesome griddle breakfast recipe to win you the Parent of the Year Award? Try these Cinnamon Toast Crunch French Toast Sticks on your flat top grill!

If there’s one thing to know about my cooking, it’s that I like to be creative. And I’m always preaching about adding extra flavor where you can. So of course when I decided to make my kids French Toast Sticks for a Sunday morning breakfast recently, I had to add a fun flavor surprise in the form of one of their favorite sugary cereals… Cinnamon Toast Crunch!

And you guys liked my video for Sausage Stuffed French Toast Roll Ups so much that I had to share this delicious and easy breakfast recipe with you also!

The Key Ingredients for the Best French Toast Sticks

Here are the ingredients that I used to make these easy and kid-friendly french toast sticks on the griddle:

For this particular french toast recipe, we used an unsliced loaf of brioche so that we could get the slices the perfect thickness.

If you’ve never had brioche, you need to finish reading this post, watch the video for these on YouTube, and then get down to your nearest grocery store and pick up a loaf! We absolutely LOVE brioche bread and buns, and while it is a couple dollars more expensive, the velvety sweet and soft texture is so worth it!

There are a lot of different ratios and measurements you can use for your french toast mixture, but most contain the same basic ingredients:

For these French Toast Sticks, I used half and half because that’s what we had on hand, and I typically use half and half for a richer french toast custard. Another fun addition is flavored coffee creamer!

I left the cinnamon out of my french toast mixture since I was coating the sticks in Cinnamon Toast Crunch… I didn’t want the cinnamon to overpower the whole breakfast and take away from the flavor of the brioche.

The Extra Bit of Crunch

And speaking of Cinnamon Toast Crunch, the popular kids’ cereal makes the perfect coating for your French Toast Sticks!

When crushed to a semi-fine consistency, the sweet crunchy cereal adheres to the french toast custard and helps to create an awesome crispy exterior on your french toast. Soft and delicate on the inside and slightly crunchy on the outside… what more could you want out of French toast?!

How to Make French Toast Sticks with Cinnamon Toast Crunch

Here’s how I made these kid-approved, not too sweet or too soggy Cinnamon Toast Crunch French Toast Sticks:

We cut our brioche loaf into pretty large sticks that were about 1″ square. We wanted the sticks to be able to hold up to the weight of the cereal coating, and we also wanted to enjoy the flavor and texture of the brioche inside the sticks without it getting too soggy.

And this size stick is great for little hands to pick up and dunk in syrup, too!

We were able to get 21 french toast sticks out of the 14 oz. unsliced brioche loaf.

I like to make the french toast mixture before crushing the cereal, because it gives the brown sugar a chance to dissolve in the egg and cream a bit. Just make sure that you whisk the mixture again right before dunking your brioche to help redistribute the sugars.

Just add the cereal to a zip top bag, squeeze out the excess air, and start smashing away. You can use your hands, the bottom of a measuring cup, a rolling pin, or a meat mallet. You’re looking for a semi-fine texture with some larger chunks of cereal… you don’t want to completely pulverize it, because what makes this recipe fun is that the Cinnamon Toast Crunch is still recognizable in your finished dish.

It’s like two breakfast favorites in one – sugar cereal and french toast dippers!

Set up a dredging station and get ready to batter your french toast sticks… You can also let the kids help out with this step! Here’s what my dredging station looked like, with wide-bottom bowls for the cereal and batter:

First dip the sticks one at a time into the french toast batter. You don’t want to just add a bunch into the batter and let them sit as you coat others with the cereal, because then they’ll get too soggy.

Instead, just gently toss each stick in the liquid mixture for about 3 seconds then immediately transfer to the cereal. Use a fork or spoon to coat all sides of the stick with the cereal and then transfer to a plate while you batter the rest of the sticks.

Step 5: Cook the french toast sticks on the griddle evenly on all sides.

For this breakfast, I used the Pit Boss Ultimate Griddle, but any flat top grill or electric griddle would work! Or, you could also cook this yummy breakfast in a skillet on your stovetop.

Start by preheating your griddle on low and then add butter. Carefully set the french toast sticks on the griddle and cook on the first side until nicely golden brown. Be careful that your cooking surface isn’t too hot, or your french toast will burn before it has a chance to get crispy.

Then, turn the sticks to the next side and continue to cook. And remember, since these sticks are nice and thick, you’ll probably need to cook all 4 sides, rather than just the top and bottom like you would for normal french toast.

When your Cinnamon Toast Crunch French Toast Sticks are done, it’s time to serve them up with your favorite syrup for dipping… Or you could get crazy and add sprinkles or let your kids dip them in hot fudge or Nutella for extra parenting (or grandparent) points!

If you give it a go, let me know how you like it in the comments below! And feel free to print the recipe to keep for later: 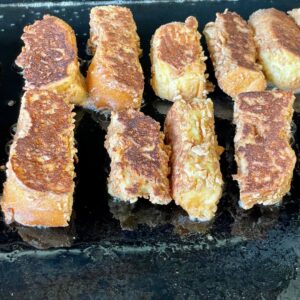