I’ve been on a quest to find the best cast iron skillet biscuits for a while now… And after multiple attempts and a whole lot of almost-perfect biscuits consumed, I think I’ve nailed down my new favorite homemade buttermilk biscuit recipe.

Sometimes it’s easier to just grab a can of Pillsbury Grands and pop them in the oven, but every now and then I like to make my own buttermilk biscuits from scratch. And these cast iron skillet biscuits are fantastic! Even after the leftover biscuits had been sitting on the counter for 3 days, they were still soft and fluffy… that’s a darn good biscuit!

If you’ve struggled with making homemade biscuits in the past, then hopefully these tips will help you…

Fortunately for me and my 45 (exaggerating) attempts at perfecting a cast iron biscuits recipe, you only need a few inexpensive ingredients, most of which you probably already have in your pantry. Here are the biscuit ingredients that you need:

Why make your biscuits in a cast iron skillet?

So of all of the cookware in your kitchen, why should you bake your biscuits in a cast iron skillet instead of on a baking sheet or in a glass baking dish? Here are a few reasons why cast iron reigns supreme… instead of just because that’s how grandma used to do it:

Cast iron is a great conductor of heat, which is why it’s perfect for searing steaks or baking biscuits. Once the pan gets hot, it retains that heat so your biscuits bake up nice and crispy on the top and bottom instead of soft, doughy, and crumbly.

When you think of the best homemade biscuits, you probably think of light and fluffy biscuits… and that means height! If your biscuits are shorter, then they’ll probably also be more dense. But the high sides of a cast iron skillet, in addition to baking powder in the dough and placing your biscuits close to each other, can help the biscuits rise because it gives them something to “climb” up.

When your raw biscuits are touching each other in a tall skillet, they can’t spread out while they bake… they can only bake upwards and rise.

Baking the biscuits in a cast iron skillet helps them to get a nice and crispy bottom.

Since a cast iron skillet retains heat so well, that means that your homemade biscuits will get a nice crispy bottom. If you’re making biscuits for homemade breakfast biscuits loaded with meat and eggs, then you’ll want a crispier biscuit to be able to hold those items. A softer bottomed, crumbly biscuit would probably just disintegrate if you tried to use it for a biscuit breakfast sandwich.

How to Make the Best Cast Iron Skillet Biscuits

You may think that making homemade fluffy biscuits is difficult, but it’s actually pretty easy! Just break down the process into steps that are manageable, focus on getting each step perfect, and you’re well on the way to fluffy buttermilk biscuits that are better than any drive-thru biscuit you can find!

Here are the steps to make the best homemade biscuits in a cast iron skillet:

The first step to making the perfect buttermilk biscuits may also be the most intimidating, but it’s actually pretty easy to do!

And funny enough, it’s called “the biscuit method“, which is the name given to the process of blending butter (or a fat of some kind) into flour so that it provides a flaky texture, and then mixing in the wet ingredients to form the dough.

It’s difficult to tell in this photo, but here’s what the process looks like to “cut” the shortening and butter into the flour and other dry ingredients:

Notice the “ribbons” of butter mixed in with the flour in the bottom left of the bowl? That’s what you want!

Continue to cut in the shortening and butter until you have a good amount of crumbly-looking, pea sized bits mixed in to your dry ingredients.

Step 2: Mix in the wet ingredients to form your biscuit dough.

Once the dry ingredients, shortening, and butter have been gently combined, it’s time to add the wet ingredients to form a dough.

But first, notice the texture and crumb-type consistency of the dry mix? That gives you an idea of what your dry ingredients should look like before adding the buttermilk and egg.

CHEF’S TIP: Beat the egg before adding it to the dry ingredients… You don’t want to overwork the dough, and if your egg is already beaten, you won’t have to do as much mixing.

Add the egg and buttermilk to the dry ingredients and gently mix to form a sticky dough. Only mix the dough just until all of the ingredients are combined… It only took me a few stirs. Your dough will definitely have more of a chunky, crumbly appearance rather than a smooth feel. Don’t over-mix the dough because then your biscuits won’t be as light and fluffy.

Your biscuit dough should look something like this, definitely still wet and sticky:

Step 3: Cut the dough into biscuits and place in the cast iron skillet.

First, make sure that you have a clean dry surface to work on, like a large cutting board or even your kitchen counter. Then, add a dusting of flour to your work surface so that the biscuit dough doesn’t stick to it.

Once your surface is prepared, it’s time to start kneading the dough. Actually, I don’t like the word “knead” to describe this process, because it’s really more of a “folding” method. You’ll need to fold the dough over a few times to form layers in your biscuits.

But before you start folding the dough, you can take a bit of a shortcut to create the biscuit layers… Just take your dough scraper (if you own a griddle, then you probably already have one!), and cut the dough into 4 equal pieces. Stack the 4 pieces on top of each other to form 4 layers, then gently press the layered dough back out into a thinner even layer.

Once your dough has been folded about 4 times, just use your fingers to press the dough out into an even layer about 3/4″ thick like this:

Then you’re ready to start cutting the dough into biscuits. Just use a biscuit cutter to press down on the dough like this, just like you would with cookies:

By the way, if you’re in the market for a new cast iron skillet, you can read my full review of the Lodge Blacklock skillet here!

Because the cast iron skillet is such a great conductor of heat, your biscuits don’t take very long at all to bake.

These biscuits were so dang good that even my wife ate a whole one by herself, and she typically doesn’t like biscuits… she would rather save her carb intake for desserts!

Here are some more tips for making the best cast iron biscuits:

Tip 1: Refrigerate the shortening for about 1 hour before starting to make your biscuits.

Tip 2: Make sure the biscuits touch each other when you place them in the skillet.

For fluffy biscuits, you want the dough to rise while it’s baking, and placing your biscuits in the pan so that they touch each other slightly is key to this. The more spread out your biscuits are in the pan, the more that they’ll spread out instead of up as they’re cooking.

Tip 3: Check the expiration dates on your baking powder and baking soda.

Since these items don’t get used very frequently, they’re more likely to be expired. If you add expired baking powder or baking soda to your biscuit dough, then your biscuits may not rise properly and they won’t be as light and fluffy.

Want to try another awesome baking recipe for your cast iron skillet? This Cast Iron Skillet Cornbread with Cheese and Green Chiles is one of my favorite things to make, especially on cool fall days when I’m making chili or beef stew! The cornbread mixture fries in the oiled skillet for the perfect crispy crust!

And if your cast iron skillet has seen better days, then check out this post: How to Season a Cast Iron Skillet 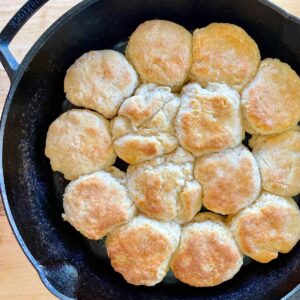