My wife does not like traditional cornbread, but she will down an entire skillet of this light and fluffy cast iron skillet cornbread… probably because it’s the perfect consistency and packed with flavor from shredded cheddar and green chiles. And don’t get me started on the perfect crust. The crust of this green chile cheese cornbread fries in olive oil in the skillet while it is baking, and it turns out the perfect crispy golden brown. Delicious!

Here’s how to make your new favorite cornbread recipe:

Ingredients for My Should-Be-Famous Cornbread

How to Make the Best Cornbread in Your Cast Iron Skillet

Start by combining all of the wet ingredients in a large bowl. That includes the egg, buttermilk, sour cream, and creamed corn. Then, add the green chiles and shredded cheese and stir to combine.

Next, add the dry ingredients (sugar, salt, and cornmeal) and fold to combine. Your buttermilk cornbread batter should look like this:

Set the batter to the side while you prep the cast iron skillets. The batter should have about 15 minutes to rest to allow air pockets to form.

While your cornbread mixture is resting, place your cast iron skillet (or you can use 2 small skillets like I did) in the oven, and preheat the oven to 450 degrees. You want to preheat your skillets while the oven is preheating also.

3. Add oil to the skillets and put back in the oven.

Once the oven reaches 450 degrees, carefully remove your cast iron skillets. They will be super HOT, so be careful!

Then, add your favorite oil to the skillets to coat. I used a mixture of avocado oil and olive oil. I carefully rotated my skillets to evenly distribute the oil, but you can also use a brush to brush the oil up the sides of the pan.

You should be left with a very small amount of oil in the bottom of your pan as well (about 1/8″ to 1/4″). This will “fry” the crust of your cornbread and make it perfectly crispy.

Once your pan(s) is oiled, but it back in the oven for about 2-3 minutes, just to heat the oil.

After 2-3 minutes, carefully remove your hot cast iron skillets, and add the green chile cheese cornbread mixture. The oil and the pans will both be piping HOT, so be careful to not drop the batter into the oil, causing splatters.

As you can see in the photo below, your cornbread should begin frying immediately:

Fill the skillets about 2/3 full of batter, and place in the oven.

5. Bake your cast iron skillet cornbread in the oven at 450 degrees.

Bake your cornbread for about 20 minutes, or until a knife inserted in the center of the cornbread comes out clean (similar to how you would test a cake for doneness).

The amount of time needed to fully bake your cornbread will also depend on the size of pan(s) that you use. If you split your batter between three 5″ skillets like I did, it will take less time to cook than using one larger cast iron skillet.

Can I make cornbread without buttermilk?

Yes! You can use whole milk or even 2% milk. The buttermilk adds a slight tang and it makes the cornbread lighter, but regular milk works fine also.

Just add a few tablespoons of diced jarred jalapeños to the batter when you add the shredded cheese. You can also add diced poblano peppers or use hot style green chiles.

What should I serve with cornbread?

This green chile and cheese cornbread pairs well with this Smoked Pot Roast on the grill or this Creamy Shrimp and Corn Soup, or serve it with your favorite chili.

Why should I make cornbread in a cast iron skillet?

Making your cornbread in a cast iron skillet will give you a perfectly crispy crust that is hard to achieve in a different type of pan. The benefit of cast iron is that it can get super hot and it holds heat well… combine that with a little oil and this cornbread batter and you’ll end up with the perfect fried crust on your cornbread.

Why does my cornbread stick to my cast iron skillet?

Your cornbread may stick to the skillet if:

Trust me… you’ll want to print this one out and add to your recipe binder! 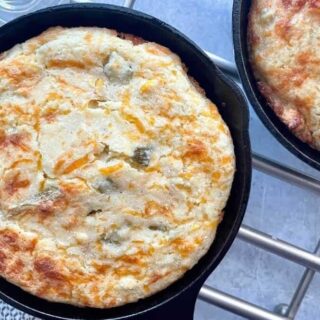 Created by: The Charcoal King

Want to Watch Me Cook?

Click here to visit The Flat Top King on YouTube! Watch me cook some of my favorite charcoal grill, flat top grill, and cast iron recipes, and get helpful tips for how to use and care for your cooking equipment!