These pizza quesadillas are so easy to make with jarred pizza or marinara sauce and your favorite toppings. Add the buttered parmesan herb crust to the outside of the quesadilla for over-the-top flavor!

If you’ve followed me on YouTube for a while, you know that I’m not a huge fan of making pizza on the griddle. Can it be done? Yes. Is it the best pizza that you’ve ever had? Definitely not. And if I’m going to burn some carbs eating pizza, you better believe that it’s going to be a deep dish from my favorite pizza restaurant, or at least a deep dish grilled cast iron pizza.

But since pizza is such a popular griddle item and so many people have asked me to make pizza on the griddle, I decided to do it my way… in the form of pizza quesadillas! What’s better than combining two foods that most people love, pizza and quesadillas, into one flavorful dish?

And even if you don’t have a griddle, or you don’t want to brave the cold temps in the dead of winter, you can still make these pizza quesadillas inside on your stove top. Here’s how to do it:

Just like making a regular homemade pizza, the topping options (or should I say filling options) are endless. Here’s what we added to our pizza quesadillas with a tasty parmesan crust:

How to Make the Best Pizza Quesadillas

There are a dozen different ways to make pizza quesadillas, and most of them involve simply adding marinara, mozzarella, and pizza toppings into a tortilla and toasting it up. But if you know me, you know that I like to add extra flavor whenever I can… hence the addition of a parmesan crust.

And since my favorite part of a quesadilla is the “cheese skirt”, or the crusty almost burnt cheese that oozes out of the side of the tortilla while your quesadilla is on the griddle, I was hoping to replicate that with a toasty parmesan exterior on my pizza quesadilla… and it worked! A little extra flavor to set this easy griddle recipe over the top!

Here’s how to make these griddle pizza quesadillas:

Step 1: Prep your favorite pizza toppings to go inside your quesadilla.

After your favorite pizza toppings are added to the inside of a tortilla, they won’t really have a chance to cook, so you’ll need to sauté any vegetables and cook the meats on the griddle first.

For our pizza quesadillas, we used Italian sausage, bell peppers, onions, and pepperoni. Since the veggies and sausage take the longest time to cook, we added those to the griddle first like this:

*Notice the wooden spatula that I’m using to brown the sausage on the Pit Boss Ultimate Griddle? You can find that plus ALL of my favorite griddle cooking tools here!

Then, when the veggies were about halfway cooked, we started crisping up the pepperoni slices on the griddle. We personally like the crispiness of the pepperonis on top of our regular pizza, so we were trying to replicate that texture as much as possible. And while they didn’t get super crispy because we were missing the 360 degree heat that you get from cooking pizza in an oven, doing it this way did help to render some of the fat out of the pepperoni slices.

When all of your meat and veggies are cooked, you can transfer them to a bowl or cutting board to begin building your quesadillas.

Step 2: Butter and season one side of your tortilla.

The next step in making these awesome and easy pizza quesadillas is to make your parmesan herb “crust”. The crust is pretty much my favorite part of a pizza (I usually have my wife eat the first 2/3 of a slice and then give me the last 1/3 with the crust), so I definitely wasn’t going to leave the tortilla of these pizza quesadillas bare.

Place one burrito sized tortilla on a large cutting board. Add a nice thin and even layer of butter to the top of the tortilla. Then sprinkle Italian herbs, oregano, dried basil, or garlic (or any combination of those) as well as grated Parmesan cheese to the butter. Gently press all of the seasonings and cheese down into the buttered tortilla so that all of that flavorful goodness sticks to the tortilla.

Then flip the tortilla over on your cutting board. Some of your seasonings and cheese will probably come off as you’re flipping the tortilla over, but don’t worry about it… Just try to scoot the extras back under the tortilla, or you can sprinkle the loose parmesan and herbs on top of the quesadilla after you get it on the griddle.

When your “crust” is buttered and seasoned, it’s time to start adding your favorite pizza toppings.

Start by spreading a thin layer of your favorite jarred marinara sauce on top of the tortilla. We really like Rao’s marinara, but pretty much any marinara or pizza sauce will work just fine.

Then, sprinkle shredded mozzarella cheese over the entire tortilla, and add the other pizza toppings to one half like this:

Since you’ll be folding the tortilla over to form the quesadilla, I find it easiest to make it this way with the bulk of the ingredients on one half of the tortilla.

Step 4: Carefully transfer your prepared tortilla to the griddle to cook.

Once your pizza quesadillas are prepped, it’s time to cook them on the griddle. Just slide each flat tortilla off of the cutting board and on to the heated griddle surface. Allow it to start cooking while it’s laid open for about 5 minutes or until the cheese starts to melt.

Then, you can slide your spatula under the half that doesn’t have the veggies and meat, and fold it over to form the quesadilla.

Allow the quesadillas to continue to cook until they’re nice and golden brown and all of the cheese is melted. You’ll probably need to flip them a few times using your spatula so that they cook evenly.

When your pizza quesadillas look something like this, you can take them off the griddle and transfer them to a cutting board to cool:

Notice the golden brown parmesan herb crust on the tortillas? Definitely worth the few extra minutes of work! The toasted parmesan added a nice crispy texture and another layer of flavor!

Step 5: Slice your pizza quesadillas into triangles and serve with marinara for dipping!

When the pizza quesadillas have cooled down a bit, you can go ahead and cut them before serving. If you cut them too soon, then most of your ingredients will slide out the sides.

We like to serve ours with a side of warm marinara sauce for dipping, but they’re great on their own also! 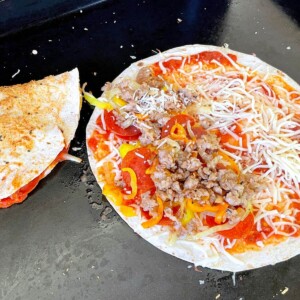 
Course Griddle Recipes
Prep Time 5 minutes
Cook Time 15 minutes
Total Time 20 minutes
4 quesadillas
These pizza quesadillas are so easy to make on the griddle or inside in a skillet! Don't forget the buttered parmesan cheese and herb "crust" on the outside of the tortilla for extra pizza flavor!
Print
Pin
Share
Rate

Want to try some other pizza-themed recipes for the griddle that aren’t, well, actual pizza? You’ve got to make these awesome pizza smash burgers! In this YouTube video, I’ll even show you a trick to up the flavor of your jarred marinara sauce!