I make my favorite bold, savory Chex Mix every year around the holidays. As I pile boxes and boxes of cereal in the shopping cart, I tell my wife that we’re going to be giving most of it away as gifts to our neighbors and friends, but truth be told, I end up eating about 75% of it myself.

So if you make this easy snack mix recipe, maybe have a little more restraint than me… or be prepared to buy a bigger belt.

As I mentioned, I’m no stranger to making homemade Chex Mix. And for the past decade or so, I’ve always made it in the oven. But cooking the Chex Mix in the oven takes forever, because my oven can only hold about 4 large sheet pans at a time, and I always make a giant batch. So I’m constantly having to rotate the sheet pans in and out of the oven, and I’m opening the oven door every 15 minutes or so to stir the snack so it cooks evenly.

And the mess in the kitchen afterwards is crazy.

But making the bold Chex Mix on the griddle is SO much easier AND faster! It only took me about 30 minutes to make a giant batch from start to finish, and I didn’t have 6 sheet pans to wash and 42,000 cereal pieces to sweep up afterwards.

Even my wife recognized how easy it was to make the Chex Mix on the Blackstone… and that’s really saying something (you guys know she can’t cook worth a darn!).

So after making Chex Mix on the flat top grill, I don’t think I’ll ever make it in the oven again.

What to Put in Bold Chex Mix

There are three main components to the perfect savory Chex Mix recipe: the dry cereal and snack foods, the wet ingredients, and the seasonings. Here’s what I use for my snack mix, which I actually call “Scrabble” instead of “Chex Mix”:

The Dry Cereal and Snacks

You can’t make Chex Mix without the most obvious ingredient, Chex cereal. But other than a few varieties of Chex, you’ll probably want to add in some other dry snacks also. Here’s what we add to our bold Chex Mix snack:

If Chex cereal is the most important ingredient in Chex Mix, then butter is the second… and this recipe takes a lot of butter!

If you’re making a large batch of snack mix like I did, then you’ll need a good amount of melted butter, Worcestershire sauce, and hot sauce. Those are the typical ingredients that you’ll melt down to form a “glue” for your seasonings to stick to.

But for this particular batch, I substituted Buffalo sauce for the hot sauce… it came out great!

The seasonings that you use for your bold Chex Mix are up to you. Feel free to experiment with your favorite bold seasonings, but for this recipe I used:

How to Make Chex Mix on the Griddle

Step 1: Mix all of the cereal and snacks together.

First, you’ll need to mix all of your cereal, pretzels, nuts, and other dry snacks together. To do this most efficiently, I dump everything into a trash bag… and I also use whole boxes of cereals and snacks so I don’t have to waste time measuring out cups of cereal. Just make sure that you use a non-scented trash bag so that your snack doesn’t end up tasting like lavender or fresh spring roses.

It may seem odd adding your food to a trash bag, but working in restaurant kitchens for over a decade, I can tell you that it’s actually a very common practice. Some chefs use trash bags to marinate meat or make large batches of dry seasonings.

Plus, adding everything to a good sturdy trash bag makes it a lot easier to mix the seasonings and wet ingredients also.

In a saucepan on the griddle, melt the butter and add the Worcestershire sauce and hot sauce. Mix those ingredients together, and once the butter is completely melted, set the pan to the side to cool down just a bit.

Step 3: Mix the seasonings for your Chex Mix.

While your butter is melting, go ahead and mix up your blend of seasonings. Just add everything to a bowl and mix together well to make your own bold Chex mix blend.

There are a few different ways that you can add the melted butter mixture and seasonings to coat the cereal mix evenly. You can either:

I personally prefer the trash bag method, because it’s very easy to incorporate the melted butter mixture and seasonings into the cereal using a gently “tumble” type motion – think of it as the “tumble dry low” setting on your dryer… crazy, I know.

The most important thing to remember about this step is to coat the cereal mix with the melted butter and Worcestershire mixture FIRST before adding the seasonings. The butter liquid acts like a glue and gives the dry seasoning something to hold on to.

Step 5: Toast the Chex Mix on the Blackstone until it’s dried out and crispy.

When all of the cereal mix is tossed together with the other ingredients, it’s time to start toasting it on the griddle. Just add the snack mix to the preheated griddle surface in an even, somewhat thin layer.

When you’re making Chex Mix on the griddle, you need to pay close attention to your flat top temperature. As any griddle owner knows, the surface can get super hot even on the low heat setting, and the cereal will burn quickly if you’re not careful.

So the biggest tip I can give you is to use your spatulas to stir the snack mix often. If it sits in one spot on the griddle for too long, especially as time goes by and the griddle temp rises, it’s more likely to burn.

And you definitely don’t need to put the griddle hood down for this. In fact, when I put the hood down on my griddle to test the cooking process, some of my snack mix burned… I was focused on letting the hood create more of a 360 degree, oven-like effect so the cereal ended up sitting on the griddle surface in one spot for a longer period of time, which caused it to get a little too crispy and blackened.

Step 6: Remove the Chex mix from the Blackstone griddle and allow it to cool.

When the bold Chex mix is done to your liking, you can transfer it to large mixing bowls to cool. The oils in the cereal and snack pieces will be super hot, so you don’t want to serve it right off the griddle.

I let mine cool and then I transfer it to gallon-sized Ziploc bags. But you can also package it up in gift tins or cellophane bags with ribbon to give as delicious holiday gifts… if you don’t eat it all first!

Want to make this delicious and easy snack on your griddle? Print the recipe card down below!

Also, I want to note that this savory, bold Chex Mix recipe is definitely customizable… You can add in your own favorite seasonings, add more hot sauce or Worcestershire, use less seasoning, whatever.

*And if you want another recipe to use your Nashville Hot Rub, try these Easy Loaded Cheese Fries on the Griddle (with Frozen French Fries)! 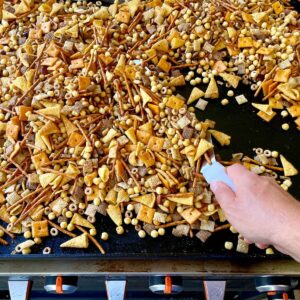 Chex Mix on the Griddle