This brisket quesadilla is loaded with barbecue flavor and cheesy goodness. Made with leftover smoked barbecue brisket, pepper jack cheese, red onions, and a few other simple barbecue ingredients, this griddle quesadilla will be your new favorite thing to make with your leftover barbecue meats!

When brisket was on sale for less than chicken breasts at my local grocery store recently, I couldn’t pass it up. And immediately my mind went into overdrive trying to think up some flavorful and easy griddle recipes to make with brisket.

Of course, my smoked brisket is good enough to eat on its own, and we could have stood at the kitchen island all night chowing down on the freshly smoked and rested brisket. But I knew that I wanted to make these awesome quesadillas and a few other recipes to come, so we had to show some restraint and save the leftovers.

How to Make the Best Brisket Quesadilla

Smoking the brisket for 12 hours and then letting it rest for 2 full hours while you resist the urge to tear into it early is definitely the hard part! After you’ve made your brisket (or pulled pork), these barbecue quesadillas come together very quickly and easily. Here’s how to do it:

*And if you want to see how to make the BEST dang brisket on your charcoal grill and then finish it in the oven, you can check out the full YouTube video tutorial for cooking brisket here! (The smoked brisket that we used in this quesadilla was actually smoked all day long on our pellet smoker, but we don’t have a video available for that yet).

Once your griddle or skillet is heated, these quesadillas cook up pretty quickly so you’ll want to make sure that all of your ingredients are chopped, shredded, and ready to go.

This includes shredding your cheese, pulling or chopping your meat, and chopping cilantro and onions.

While you’re prepping your ingredients, you can go ahead and preheat your griddle on low also… just don’t let it heat up for too long or it will be too hot and your tortilla will burn.

Step 2: Heat up your leftover brisket with some barbecue sauce.

The leftover brisket that we used for our quesadillas was fresh out of the refrigerator, so we needed to heat it up just a bit on the griddle first. BUT, you definitely don’t want to overcook your brisket or other smoked meats… Chances are that they’ve already been cooking for at least 8 hours on your smoker, so you definitely don’t want to lose all of that tender juicy goodness that you worked so hard to get in the first place.

I just added the chopped brisket to the coolest side of my griddle and then poured on some barbecue sauce. Mix the meat and the sauce together and let your brisket get warm. The sauce will probably also reduce some so that your brisket is not too saucy for your quesadillas.

Step 3: Put your tortilla on the griddle and start adding your brisket quesadilla ingredients.

When all of your ingredients are “mise en placed” (fancy French word for gathered, put in place, or prepped), add a thin layer of butter to one side of the tortilla. Then, place the tortilla on the griddle butter side down and start adding the quesadilla filling.

Start by adding the shredded cheeses to the tortilla first so that they will be closest to the heat source, your griddle surface. Then, sprinkle on the sliced green onions. Next, I added pickled red onions to one half of the tortilla and bread and butter pickles to the other half… Be sure that your onions and pickles are drained well so as not to add too much extra moisture to your quesadilla.

You can definitely pickle your own red onions, but we actually found a jarred variety in the pickles and olives section of the grocery store. Or, swap out the pickled onions for thinly sliced raw red onion.

Then, add the smoked brisket to one side of the tortilla like this:

Step 4: Fold tortilla in half to make the brisket quesadilla.

After you add the brisket, use your spatula to fold the tortilla in half to form a quesadilla. Then, continue to cook your quesadilla until both sides are nice and crispy golden brown, or as I like to call it, “GBD” (Golden Brown Delicious). You’ll also probably need to flip your quesadilla a few times to ensure that it cooks evenly on both sides.

And don’t be afraid if a bit of your shredded cheese leaks out the side of your quesadilla. This “cheese skirt” will crisp up nicely on the griddle and add a TON of flavor!

Step 5: Let the brisket quesadilla cool a bit before cutting it.

This part is pretty important… You don’t want to cut the barbecue brisket quesadillas immediately when they come off the griddle or out of the skillet, because the cheese will be too runny. It’s much better to wait about 5 minutes for the melted cheese to set up a bit so that your quesadilla is easier to eat.

Then, cut it into triangles and serve!

Other Ideas for Barbecue Quesadillas

Besides swapping out the meat to use up whatever leftover barbecue that you have in the fridge, you can also customize the other quesadilla ingredients. Here are some other options that would be fantastic additions to barbecue quesadillas:

Just be sure to not overstuff your quesadillas because then you won’t be able to pick them up and eat them. Or, say to heck with that, and just dig into a big plate of barbecue quesadillas with a knife and fork!

What type of tortillas should I use for quesadillas?

Little known fact… quesadillas are made with tortillas that are folded in half, NOT two tortillas stacked on top of each other with fillings in between, which is called a “sincronizada“. And since we stuffed this “barbecue turnover” with ALL the brisket cheesy goodness, we used the large burrito size flour tortillas. Traditionally, corn tortillas are used to make quesadillas BUT these barbecue brisket quesadillas are far from traditional.

We actually used low carb flour tortillas for our quesadillas because we’ve been trying to watch our carb intake. If you’re on a low carb diet also, you can use a low sugar barbecue sauce in this recipe.

What type of cheese should I use?

I really like the combination of the cheddar and pepper jack cheeses in this recipe, and even if I’m making barbecue flatbread or pizza, I replace the mozzarella with a sharp cheddar cheese. But feel free to experiment with the cheeses… I just recommend that you shred your cheese yourself because it will melt better for your quesadillas.

What if I don’t have brisket? Can I use a different meat for barbecue quesadillas?

Absolutely! This same recipe would work just as well for leftover (or even store-bought) pulled pork or shredded rotisserie chicken.

Feel free to use the recipe card below to print this delicious barbecue quesadilla recipe for the next time you’ve got leftover meats in the fridge: 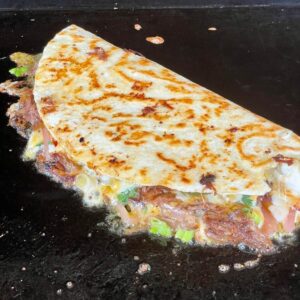 If you don't have brisket, you may substitute pulled pork or pulled rotisserie chicken for awesome barbecue quesadillas!