Looking for breakfast recipes to make with canned Pillsbury Grands biscuits? These biscuit tacos are packed with flavor and cook up super quick on your Blackstone griddle or even in a skillet!

Ever since Taco Bell came out with a breakfast biscuit taco, it seems like Blackstone griddle owners are taking note! And I can’t say that I blame them… Combine two foods that are awesome by themselves, biscuits and tacos, and you’ve got a recipe for greatness!

So after seeing a few people post photos of their breakfast tacos made with canned biscuits, I knew that I had to give them a try.

And if you’re looking for easy Blackstone griddle breakfast recipes that are packed with flavor, and a recipe that will give you a good excuse to eat tacos for breakfast, then this post is for you!

What is a Biscuit Taco?

A biscuit taco is pretty much exactly what it sounds like… biscuit dough that has been flattened, cooked on both sides (either on a griddle or in a skillet), then folded in half to form a taco shell shape.

You can make biscuit tacos for breakfast or dinner, just by changing up the taco filling ingredients that you use. Make breakfast biscuit tacos with scrambled eggs and breakfast meat, or use canned biscuits to make regular Mexican style tacos with ground beef and your favorite toppings.

The flattened out Pillsbury Grands biscuits still rise a bit when you’re using them to make tacos, similar to a softer and thicker Mexican Gordita. And the canned biscuit tacos are definitely fluffier than a regular soft flour tortilla, which makes these delicious breakfast tacos nice and tender.

The filling options for breakfast tacos are limitless… You can make your tacos with scrambled eggs or over medium eggs, crumbled sausage, chopped cooked bacon, and any type of cheese that you like. But I chose to go with Southwest style biscuit breakfast tacos, and they turned out great! Hands down, one of my favorite breakfast recipes for the Blackstone griddle!

Here’s what I used to make 6 biscuit tacos:

You may also want to use the Blackstone taco holder like I did… While it’s not completely necessary, I did find that the holder helped to keep my biscuit tacos in the correct shape, and it made it easier to stuff the tacos with my breakfast fillings.

How to Make Breakfast Tacos with Canned Biscuits

These biscuit tacos are so easy to make on the griddle. And you can even make them using leftover breakfast items that you have in your fridge, like cooked bacon or leftover hash browns, to make this Blackstone griddle recipe even faster.

Here’s how to make these delicious and flavor-loaded Southwest Breakfast Biscuit Tacos:

First, separate the canned Pillsbury biscuits into individual servings. Then, take each raw biscuit and roll it out thin using a rolling pin or a large canned good. I found that the stickiness of the biscuit dough actually made it easier to roll the biscuits out flat, because the dough stuck a bit to the surface instead of to my rolling pin. However, if you’re having difficulty rolling out the dough, then you can also add a light dusting of flour to your work surface or rolling pin.

As you’re rolling out the dough, do your best to keep it in a circle shape. I find it easiest to start with the rolling pin in the center of the dough and then roll outwards to the edges, just like you would if you were rolling out pie dough or homemade flour tortillas.

Roll out the dough until it is very thin (like less than 1/4″ inch thick) because the dough will rise just a bit as you cook it on the griddle, and you don’t want your canned biscuit tacos to end up being too thick.

Step 2: Cook your breakfast meat and vegetables on the griddle.

Once your canned biscuit dough is rolled out, go ahead and start cooking the chorizo (or breakfast meat of your choice) and the potatoes, peppers, and onions. The breakfast taco fillings take much longer to cook than the actual biscuit dough, so you’ll want to make sure that your meat and veggies are at least 75% cooked through before adding the rolled out biscuit “tortillas” to the griddle.

I chose to use the Johnsonville Chorizo Sausage for my biscuit breakfast tacos, so after I removed the casing membrane from each sausage, I rough chopped it before starting to cook it. I prefer my chorizo to be a bit chunkier than most, but if you like a finer ground sausage, then you can chop it smaller as you cook it on the flat top grill.

Just start sautéing the chorizo and diced vegetables on the griddle like this… The fat from the meat will help to flavor the vegetables:

As I was brainstorming this dish, I decided to make the meat mixture similar to a chopped cheese, so when the filling ingredients were almost all the way done, I just laid a few slices of pepper jack cheese on top like this:

Allow the cheese to start melting through the nooks and crannies of the chorizo and veggies underneath, and then toss it all together briefly before taking the taco filling off the griddle.

Step 3: Cook the flattened biscuit dough on the Blackstone griddle.

When your meat and veggies are about 75% done, clear off a space on the cooler side of your griddle and start cooking the rolled out biscuit dough. Try to avoid placing the dough on the hotter areas of your griddle surface so that it doesn’t burn. Your canned biscuit dough should look something like this:

*NOTE – If you notice that your biscuit dough has started to rise since you rolled it out, and it’s not as thin as it was before, go ahead and roll each biscuit out a few more times before putting them on the heated griddle.

These biscuit taco shells cook up similarly to pancakes… You’ll start to see little “bubbles” in the dough and the sides will start to set up. You can also use your griddle spatula to check the underside of the biscuits for doneness before you flip them.

When your biscuits are nice and golden brown on both sides, transfer them to a taco holder to help form them into a taco shell shape. Or, you can just remove them from the griddle and fold them in half, taking care not to tear them down the center.

If you’re using the taco holder like I did, I suggest putting it on top of a wire rack on the griddle, to elevate the cooked biscuits off the heat and prevent burning. Your biscuit taco shells will stay nice and warm, but they won’t get too dark on the bottom.

Step 4: Cook your eggs, and build your breakfast biscuit tacos.

When the biscuit tacos are done and your other taco fillings are cooked through, it’s time to cook the eggs for your breakfast tacos. How you cook the eggs is up to you… We made over medium eggs and scrambled eggs with White American cheese, and both types were delicious on these biscuit tacos.

Then, when your eggs are cooked, it’s time to build the perfect biscuit taco:

We added a store-bought Cilantro Lime taco sauce which was super good, as well as salsa, hot sauce, and diced avocado. And then we proceeded to devour these Blackstone griddle breakfast tacos!

Seriously, if you want a filling and flavor-packed breakfast idea to make on your griddle or flat top grill, you’ve got to try these!

These flavorful Southwest breakfast biscuit tacos are super easy to make, but just in case you still have questions…

Can I make these biscuit tacos without a griddle?

Absolutely! If you’re familiar with griddle cooking, then you know that pretty much anything that you make on a flat top grill can also be made in a skillet indoors. So if it’s too cold outside, try this easy biscuit taco recipe inside in your cast iron skillet or even on a countertop electric skillet.

My biscuit tacos got burnt on the griddle… Any tips?

If you’re a frequent griddle user, then you know that the Blackstone griddle and most other flat top grills can get super hot, even on the low heat setting. That’s because the longer that the griddle is on, the more that the rolled steel surface is building heat from the flames underneath.

If you find that the biscuit dough is burning on the griddle before it has a chance to cook through, then try using the cooler zones of your griddle, or squirt some water on the surface of the griddle to drop the temp a bit before adding the biscuits.

I don’t like chorizo… What else can I use for the biscuit tacos?

Any breakfast meat will work, or you can even do a vegetarian biscuit taco loaded with spinach, mushrooms, jalapeños, and Mexican seasonings. Or try ground breakfast sausage and a bit of taco seasoning for a similar taste without using chorizo.

What type of biscuits do I need to make biscuit tacos?

I recommend the Pillsbury Grands biscuits, but the actual flavor variety is up to you… The Buttermilk, Southern Recipe, and Original Grands biscuits would all be great in this recipe. Just stay away from the Flaky Layers variety, as they would probably poof up too much for biscuit tacos.

I’m on a low carb diet, but these biscuit tacos look amazing… Any ideas?

Absolutely! If you’re trying to watch your carbs, then you can substitute the biscuit dough for a low carb soft taco-sized tortilla and leave out the diced potatoes. The mix of chorizo, salsa, avocado, and cilantro lime taco sauce is fantastic, even if you leave out the biscuit!

In fact, the wife and I try to watch our carb intake also, and after devouring one of these biscuit tacos as is (we couldn’t help ourselves – they were that dang good!), we scraped off the filling into a bowl and ate it like a Southwest breakfast bowl of sorts.

Want to print out this biscuit tacos recipe to add to your binder of Blackstone griddle recipes? Just use the recipe card down below… Then head back here to leave me a comment and let me know what you think about these easy griddle breakfast tacos!

And be sure to check out some of my other Mexican-inspired Blackstone griddle recipes: 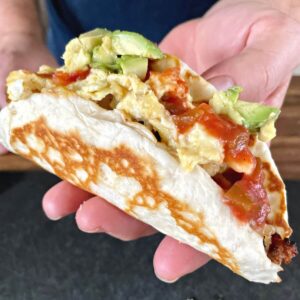 And don’t forget to save this PIN to your Blackstone Griddle Recipes PINTEREST board: